Choosing Health
Power couple’s journey leads them to choose a plant based diet. 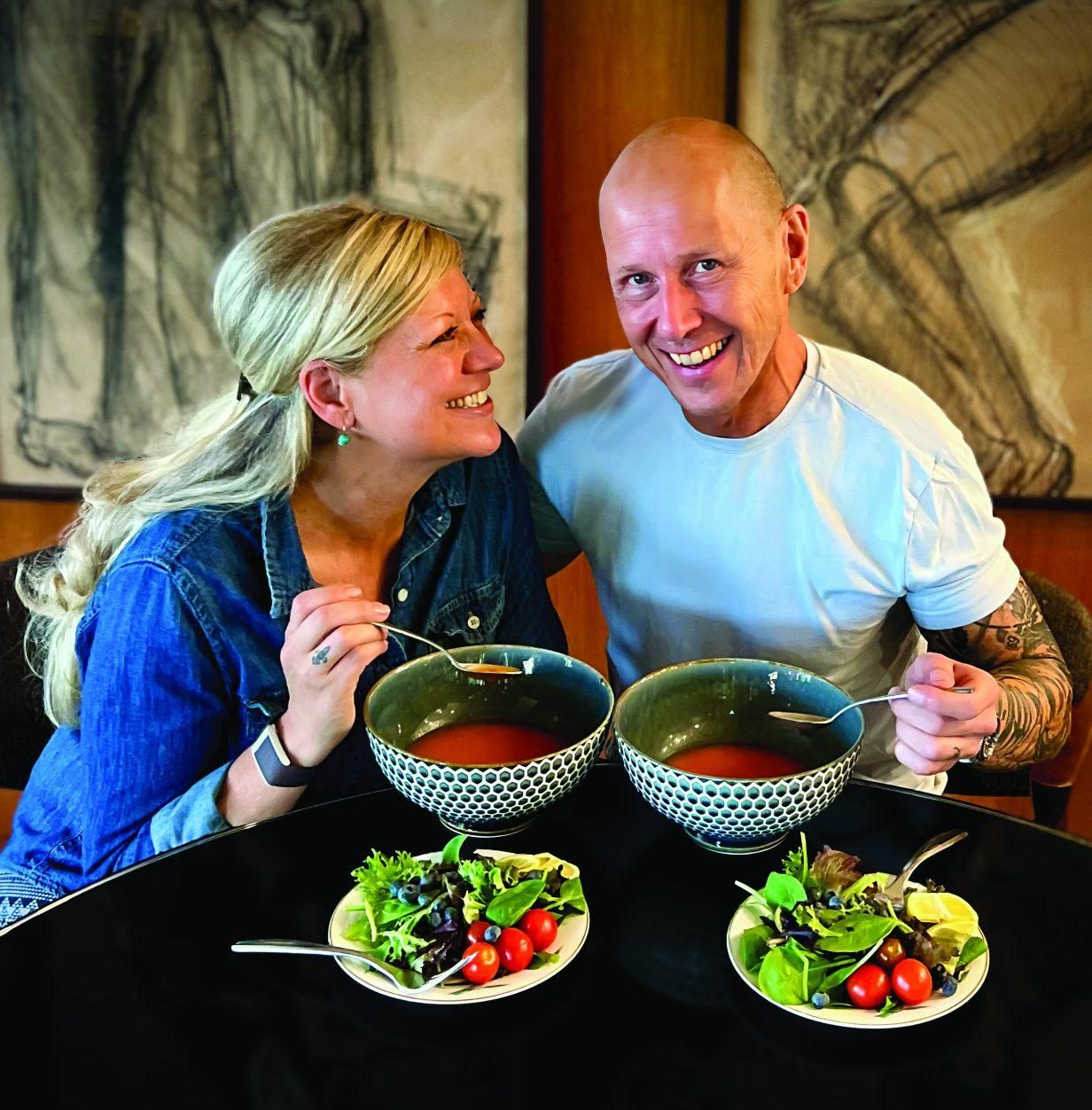 Matt Poischbeg’s mid-century modern home. Tucked into a rare and welcoming wooded acre in an Everett neighborhood, the home’s large windows let in plenty of light. This day, the tables were filled with guests, the conversation dynamic, and the smells from the kitchen heavenly.

It’s just the environment Wendy wants to create — one of conversation around our food, our food systems, and our health, and of building a community of friends around, specifically, a plant based diet.

The couple has been through just about every diet in the books. Paleo diet? Matt was in heaven! Bacon and Bison every single day.

“I could eat meat every day,’ Matt said. “I could see myself on a pizza diet if it could be healthy!” “And I’ve never seen him happier!” Wendy said.

“Did I feel good? I would say yes,” he added. “Until I went to the doctor and had my blood tested. Cholesterol was the highest I ever had in my life. That ended that.”

They used to juice their fruits and veggies. “Don’t do that,” Wendy said. “Just eat food.”

Eggs? Oh yeah! A dozen a day for the protein in the egg whites. 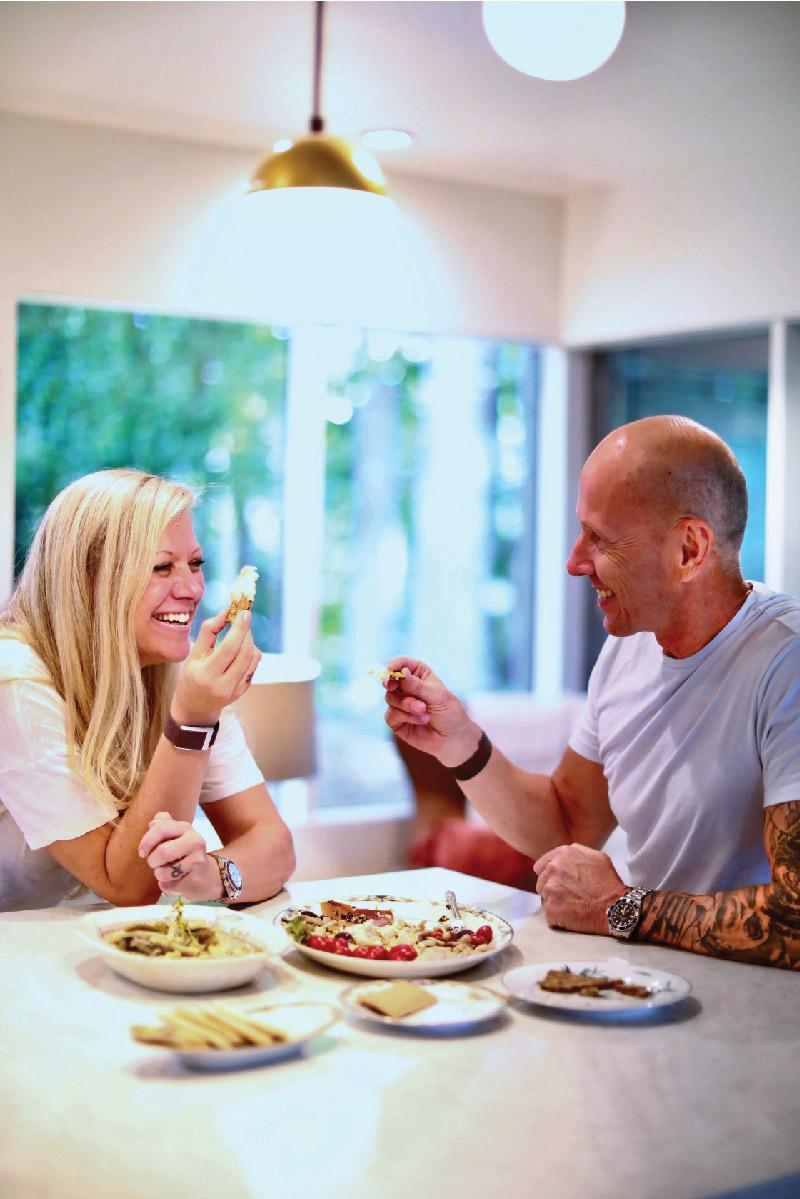 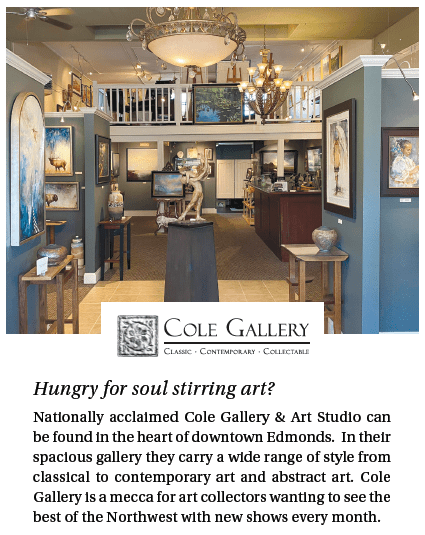 Matt’s health, though, wasn’t improving. The two were committed athletes, running marathons and taking on every challenge they could find. But the challenge of how to eat was a vexing one.

Through all this, Matt went to the doctor for relief from chest pain — “it feels like somebody clamps the chest down,” Matt said. Testing to determine if he had a dairy allergy, the couple quit drinking milk and replaced it with alternative, plant based milks. He was still having the problem. Then they looked at the ingredients.

“That’s when we realized — because we already knew he couldn’t eat any processed cracker — that it was the shelf stabilizers. It wasn’t the dairy, it was the preservatives,” Wendy said.

In Matt’s native Germany, those ingredients are banned, and he has no health effect when he eats bread and crackers there.

The couple was inspired by a podcast with four-star Michelin Chef Daniel Humm, who converted New York’s Eleven Madison Park to a plant based menu. Humm’s restaurant is the only vegan restaurant among the 132 three-star restaurants around the world. It was considered financial suicide — but the restaurant’s waitlist exceeds 15,000 people.

WHAT IS “PLANT BASED”?

For a definition and comparison, a vegan diet includes vegetables and fruits, excluding all animal products. So does plant based eating. But plant based also excludes refined and processed foods, including those processed meat alternatives marketed as “plant based.” For some, that also includes processed oils. For others, that’s a bridge too far.

“It’s hard to cook without some oils,” said Chef Victoria Balas of Culinary Immigration in Marysville. 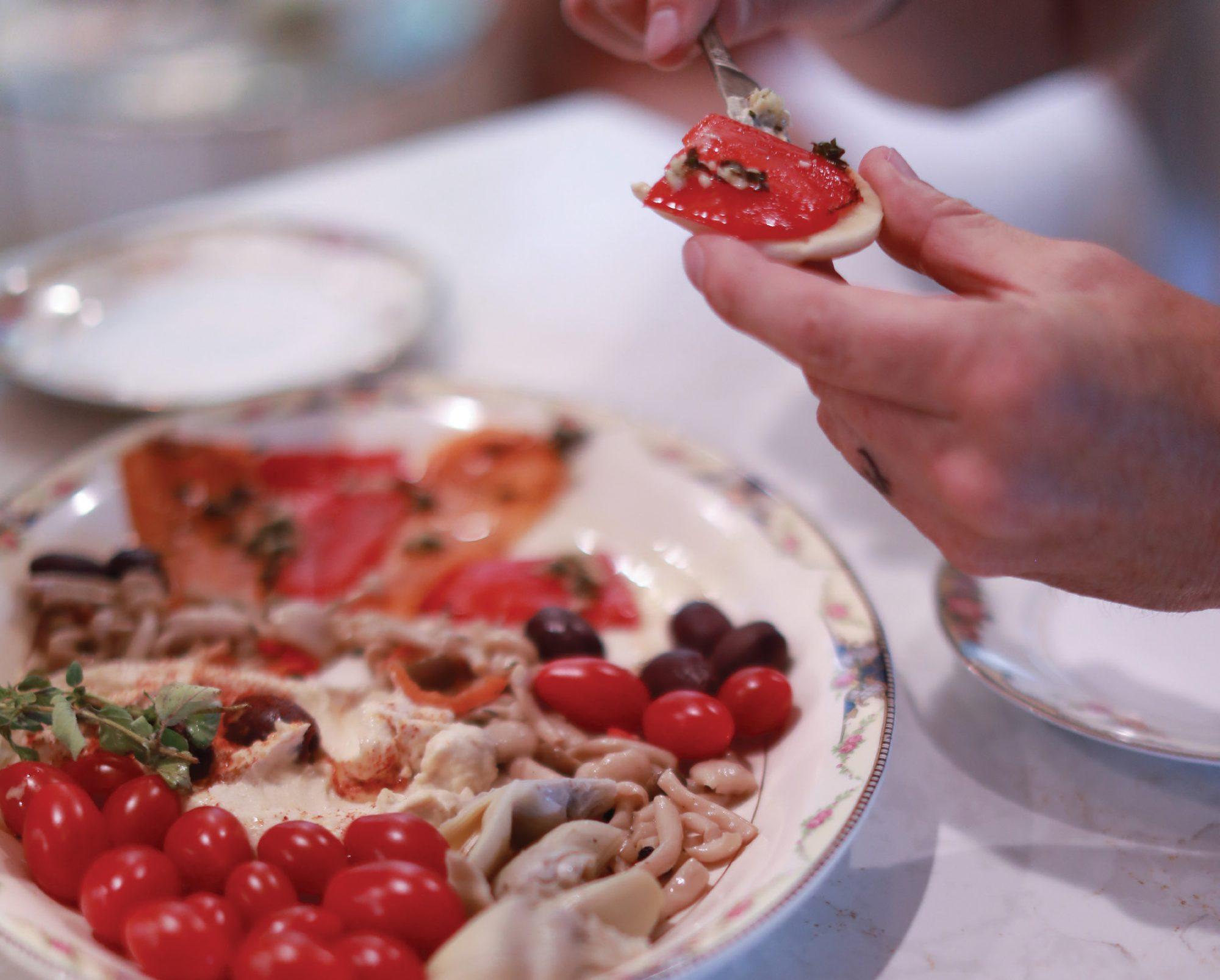 The Blue Zone diets would be that step in between. They are primarily whole grain, plant based, but vary widely by culture, very occasionally incorporating small amounts of meat, fish, dairy and olive oil. National Geographic Fellow Dan Buettner’s bestselling book, “Blue Zone Solutions” investigated diets around the world where people lived healthy lives to be over 100 years old. These diets included Greek, Italian, North and South American, and Japanese foods.

To eat vegetarian, vegan, plant based, blue zone, or whatever other iteration of diet that focuses on fruits and vegetables, you don’t have to stick to any particular kind of region or cuisine. Most regions are adaptable to the style with a little creativity. It’s always harder to eat healthy when traveling, especially. The good news is that most restaurants have an increasingly diverse menu to accommodate, offering at least one viable option. Restaurants will typically mark menu items as “vegan,” but asking for a minor modification to an existing menu item works, too.

For Matt, food is fuel. It’s that simple. But for Wendy, food is communing with friends, it’s connection to earth and to humanity. Switching to a plant based diet meant potlucks, picnics, and gatherings of friends for dinner parties left her on the sidelines. She wanted to build a community around this way of eating, and has since brought Balas to her home for lessons.

Balas was busy in Wendy’s kitchen producing aromatic and colorful dishes during an August evening. The theme for the meal was Eastern Indian: mango lassi, spicy mango chaat served with samosas, cilantro mint chutney, beet salad with toasted coconut, curries, vindaloo, and saag made with cashew cream and tofu.

Between bites, Wendy shared that her mother was in the hospital on hospice, her body failing.

“Whatever is going on now, happened 30 or 40 years ago. Every time I leave her center, I double down on my health. Knowing that our food system is so messed up is offensive. We should all be banging a drum that this is not OK,” she said.

The diners nodded their heads while passing around the Talla. Welcome Magazine publisher Fawn Clark was among Poischbegs’ guests for the evening. Her husband’s doctor handed him a book: “How Not to Die,” by Dr. Michael Greger. The couple committed to a plant based diet, which has demonstrated the capacity to reduce and even reverse disease.

“It was remarkable that the doctor is working with him, even acknowledging that diet can make a difference,” Clark said. “Greger simplified it all: eat colorful food, don’t eat processed foods.”

“The really important thing is that everybody here is aware of the changes they have to make within themselves,” she said to the gathering of diners, adding that she enjoys cooking with her 7-year-old grandson. “It’s OK to eat this way. It’s not torture. It’s not denial.”

She also has hopes that plant based eating will help save the planet.

Most of the diners at the table loved their vegetables, but acknowledged that cooking completely plant based had been elusive as they try to please their family with meals.

“I started doing this vegetarian stuff when I was 17,” Wendy said.

“I learned to not draw a line in the sand. If your intentions are for best health, do the best you can.”

She added, looking at her sweetheart, whom she’s been married to for just under a decade, “My intentions are to live to 100 with you.”

“I have met this person who is so amazing,” she said. “I don’t want him to take care of me in sickness. I really want him to partner with me in health.”

Culinary Immigration recipes to YUM over!

Pour just enough tamarind pure over the pineapple cubes to lightly coat them. Mix in the coriander leaves and season to taste with salt. Serve chilled.

Simple to make, this is just cubes of peeled apple and a handful of fresh mint and coriander leaves, pureed. Add don’t-ask-me- how-much-apple. Just mix it until it pleases you! 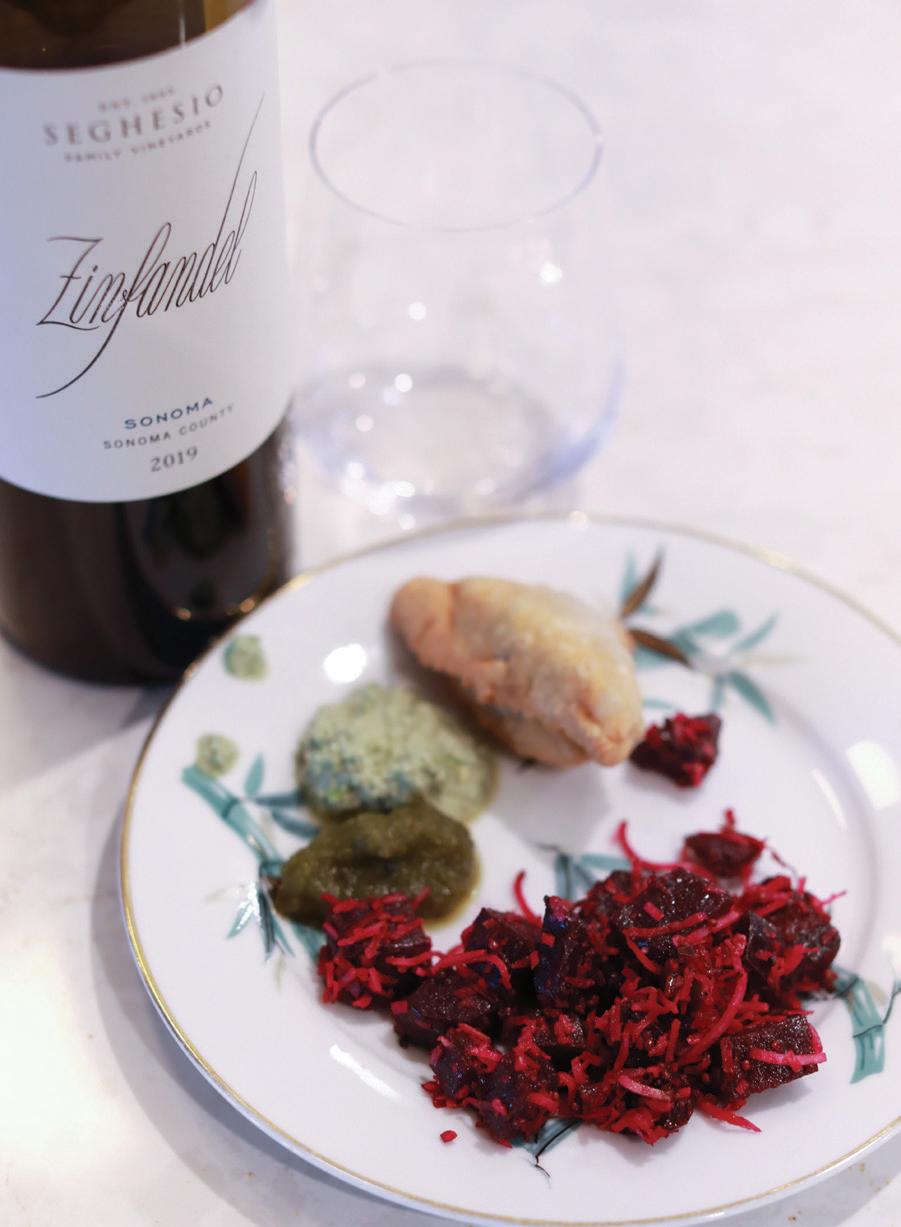 Sauté the shallots in some oil until they are soft and translucent and slightly golden.

Stir in the chilies and continue cooking until they are soft and well mixed with the shallots.

Stir in the chopped mango and ginger and season to taste with sugar and salt, then simmer until you have a typical chutney consistency. Allow the chutney to cool and then refrigerate.

Heat the coconut and sugar in a pan until the sugar has dissolved. Add the rest of the ingredients while warm. Place in a loaf pan and freeze. When you are ready to serve, remove from freezer and soften a bit before serving.

Share
Oh, the Places You Can Go with Alaska Airlines Nonstop Service From Everett 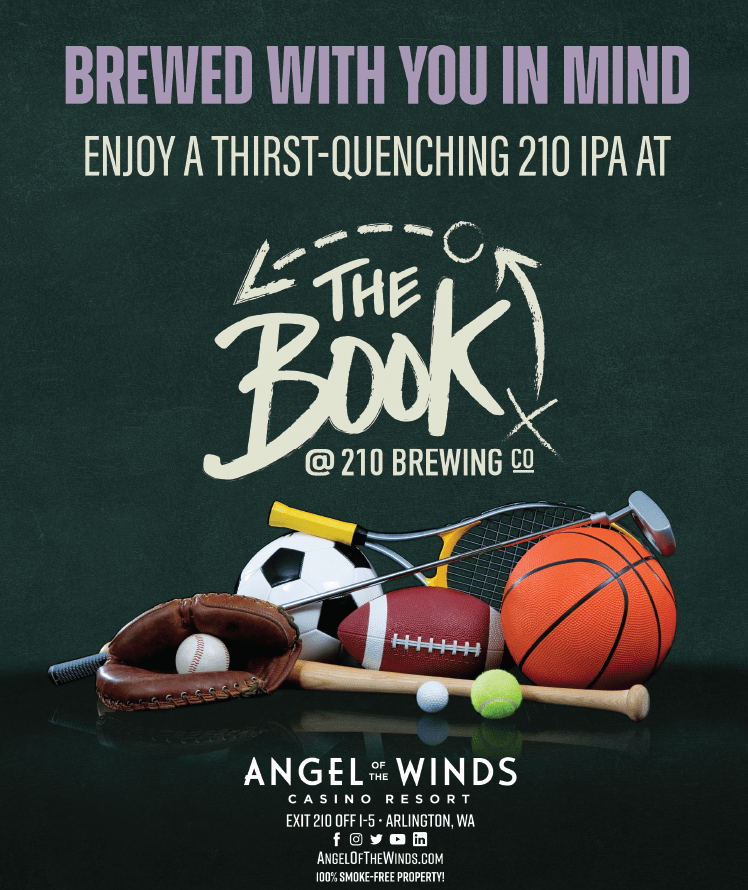